I love frequenting the boards at www.WDWMagic.com. The fans are (by and large) well-informed and engaged, and some of them have valuable contacts that are well-placed inside the Walt Disney Company.

On January 18, 2017, user danlb_2000 posted that a permit had been filed that day with the South Florida Water Management District for Project 88 at the Caribbean Beach Resort (CBR). Work was scheduled to begin this year (and be completed in 2019) on seven new buildings at CBR. These buildings, however, don't all seem to be well suited for guest lodging or hotel operations. Here is a map he provided with the proposed buildings circled in red: 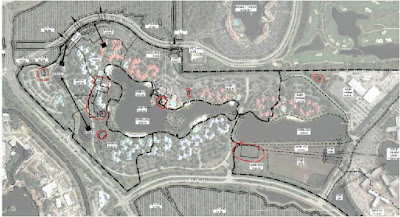 CBR has long been rumored as a possible location for a Disney Vacation Club (DVC) expansion, and the largest building seems to be suited for that possibility. But this raises a couple of questions:

Speculation on new transportation choices at CBR has been rampant since DVC was mentioned as a possibility at that resort. There are seven bus stops at the resort, and any bus heading to the theme parks stops at each and every one of them before heading to the parks. For a resort that is actually pretty centrally located, getting anywhere seems to take forever. But there are a couple of solutions to that issue that have always seemed liker no-brainers. If you look at a map, walkways or canals providing boat transportation to Epcot and Disney's Hollywood Studios seem like easy fixes: 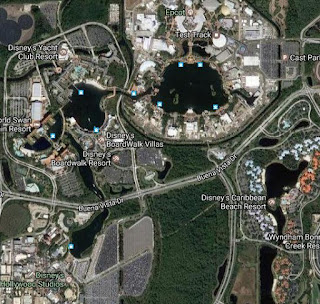 Then the always well-informed (though often cryptic so as to protect his sources) marni1971 chimed in, saying, “Connection options are being pursued. I'd doubt it'll be walking.” He also seems to be hesitant to commit to this being a DVC project. Other sources, however, appear to be pretty sure.

The boats have issues, as well. Some sources are claiming that getting the waterways to connect for boat travel could be more trouble than it's worth.

And let's not forget, what's with the little buildings?

On Monday February 13th, danlb_2000 (this guy is on top of things!) posted that two new small buildings were going in: one near the entrance to DHS (green circle), and the other by the Boardwalk parking lot (red circle): 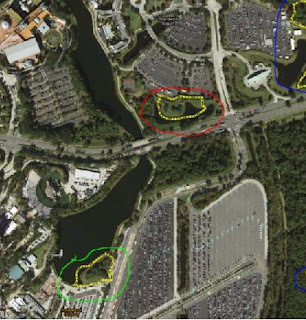 As the structure near DHS was right next to the bus stops, many posters agreed that it could be related to transportation. TiggerDad noted that while it did not align with the park entrance, it lined up perfectly with a “construction road” east of the parking lot. Dandlb_2000 took it one step further and realized both of those things lined up with one of the unidentified new buildings at CBR!

Now the speculation really kicked into gear. A tram path? Bathrooms? Cable cars? An overhead walkway? Road expansions? A trebuchet? People were starting to loose interest, but good old marni1971 (the guy with the inside connections) kept posting cryptic comments. Really cryptic; sometimes just, “Hmmm...” Then danlb_2000 put all of the maps together, including a proposed structure at Disney's Pop Century/Art of Animation Resorts: 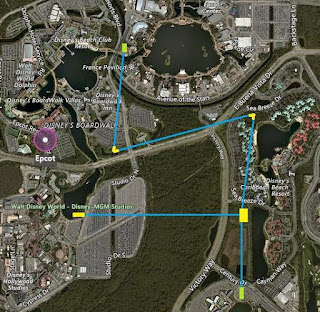 The word “gondola” started floating around. A lot. Poster monothingie noted that some of the buildings looked perfectly designed as gondola hubs for changing direction: 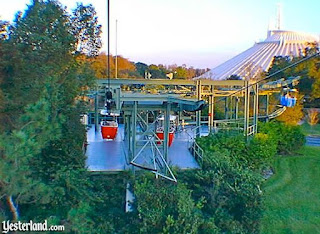 At 2:01 AM EST today, marni1971 confirmed: “It is indeed a gondola transportation system that's being planned. A little odd I know given the central Florida climate and it's a shame it's not a WEDway but it is a real thing.” And folks, let me tell ya: if marni says it, you can take it to the bank.

So, gondolas may be coming to WDW as a bona fide transportation option! I say may, because Disney plans often change. But if construction hasn't begun already it at least appears imminent, so I like our odds.

Now, let's be clear here: I'm not talking the tiny four-seat, open-aired models that used to be in the parks. I think this would be more similar to the Emirates Air Line cable cars in London – enclosed, air-conditioned, multi-passenger cars. London's have a maximum capacity of 2,500 passengers per hour in each direction. Even at low speeds, the constant-cycle loading and unloading could prove to be much less time consuming than bus transportation, and better for the environment. My fingers are officially crossed!

How do you feel?  Please let me know at https://www.facebook.com/disneygene!

*Photo credits to Google, users on the WDWMagic boards, and Yesterland.com.