Guilty pleasures – we all have them. Some might think my Disney obsession alone would qualify, but that doesn't even scratch the surface for me. And of my Disney guilty pleasures, my love for the Country Bear Jamboree has to be towards the top of the list. Therefore, I thought it would be fun to take an in-depth look at this classic attraction.

♪ Let's start at the very beginning, a very good place to start. ♪ (I think we all know that's not the last time I'll be singing in this article. You've been warned.) The Country Bear Jamboree (CBJ) got its start long before Walt Disney World was brought into existence. “Of course,” you're thinking, “it must have premiered at Disneyland.” Wrong! CBJ was first conceived as a dinner show for Disney's Mineral King Ski Resort which Walt Disney was trying to build in the mid 1960s. Walt wanted to make sure that after guests spent their days skiing and hiking, they still had a reason to remain at the resort for the evening. According to the book Disneyland: the Nickel Tour (by Bruce Gordon and David Mumford):

So Walt commissioned [Imagineer] Marc Davis to come up with shows that would keep those folks (and their money) right there at Mineral King. “Walt thought maybe we should have a show that had something to do with bears,” Marc recalled. “Lots and lots of bears.”

Davis, together with Al Bertino, began developing the concept. One day, Davis was working on drawings of the characters in his office. Walt walked in and saw the drawings and laughed because he loved the characters. That was the last time Davis saw Disney, who died a few days later on December 15, 1966. CBJ has therefore become affectionately known as “Walt's Last Laugh”.

Although the Mineral King project was eventually scrapped, the Bears lived on. When it became clear that the resort would not be built in the foreseeable future, the Disney Company decided to move the attraction to the soon to be opened Walt Disney World. The attraction debuted as the Country Bear Jamboree with the rest of Walt Disney World on October 1, 1971.

Located in Frontierland, Grizzly Hall is the longtime venue for my beloved Bears. As you wait in the front room for entrance into the theater proper, make note of the “claw marks” in the floor. This is one of my favorite Disney touches.

Inside the theater, your first introduction to this wonderful cast of characters are three fellows that have just been “hanging around” to meet you. (Sorry; I couldn't resist.) Melvin the Moose (voiced by Bill Lee), Buff the buffalo (aka Disney Legend Thurl Ravenscroft, who is also heard in a few places you might know – the Haunted Mansion, Walt Disney's Enchanted Tiki Room, and Pirates of the Caribbean, for starters), and Max the stag (Pete Renaday) join you in waiting (with varying degrees of patience) for the show to begin.

The show. Here's where I start to get a little sad. You see, when the show first opened in 1971 (sponsored by Pepsi and Frito Lay, no less), it ran for about fifteen glorious, fun-filled, knee-slapping minutes. In 2012, Disney closed the show briefly for a refurbishment, and reopened with a bastardized truncated version. I'm still bitter.

That wasn't the first time the show had been changed. In 1984 the attraction was given a new show during the holiday season called the “Country Bear Christmas Special”. The show would return annually around Christmastime until 2005. And in 1986, Disney decided to create a new show for the attraction, "The Country Bear Vacation Hoedown". Vacation Hoedown featured the bears in their vacation outfits, singing new songs such as “Ghost Riders in the Sky” and “On the Road Again”. Due to attendance struggles, however, the new show only lasted for six years and the original thankfully returned. (Until the 2012 travesty, that is.)

Here's a lovely introduction to the show as it appears in my 1972 “Original Sound Track, a magnificent full-color illustrated book and long-playing record”: 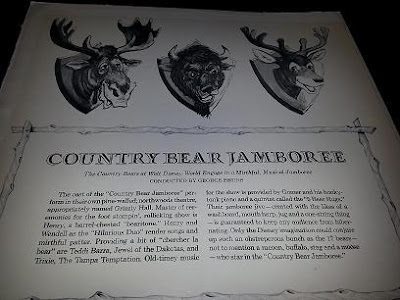 And now, allow me to introduce you to my favorite ursine entertainers:

Henry- The host of the show, Henry is a large, friendly brown bear sporting a grey top hat, starched shirt, and a string tie. Voiced by Pete Renaday (who also provided voices for 20,000 Leagues Under the Sea, The Hall of Presidents, and the WEDWay PeopleMover/Tomorrowland Transit Authority), Henry plays the guitar and sings. He is featured on the songs: "The Bear Band Serenade", "The Ballad of Davy Crockett", "Come Again", and prior to the 2012 refurbishment of the attraction, "Fractured Folk Song". Henry is joined in the final three songs by Sammy, his raccoon pal who cuddles around Henry's top hat, acting like a coonskin cap.

Gomer- Gomer is a tall bear who wears a collar and tie. He's the resident piano player/accompanist, and according to his bio is highly regarded by the other musicians because he can play in a key other than C.

Wendell- Wendell is a buck-toothed golden brown bear who plays the mandolin. He wears a blue bandanna and a hat. Voiced by Bill Cole, Wendell sings "Mamma, Don't Whip Little Buford" with Henry as well as joining the bears to sing the finale, "Ole Slew-Foot". Prior to 2012 Wendell performed "Fractured Folk Song" with Henry.

Liver Lips McGrowl- A big bear who gets his name from his large lips, Liver Lips plays the guitar. He is voiced by Jimmy Stoneman and sings "My Woman Ain't Pretty (But She Don't Swear None)" and joins the bears in the finale, "Ole Slew-Foot". As a side note, he always reminded me a little bit of Elvis.

Trixie- Voiced by Cheryl Poole, Trixie is a large brown bear who appears in a blue bow and tutu, holding a blue handkerchief and wine glass (which never spills!). Trixie is one of the few bears that does not appear in the finale of the show, however she does sing one of my favorites, "Tears Will Be the Chaser For Your Wine".

Terrance (aka Shaker)- Terrance is a tall bear with tan fur and a bit of a snaggletooth who plays the guitar while wearing a cap and yellow vest. He is voiced by Van Stoneman and sings "How Long Will My Baby Be Gone” as well as appearing in the finale.

The Sun Bonnet Trio- Those little Sun Bonnets from the Sunshine State, Bunny (Jackie Ward), Bubbles (Loulie Jean Norman), and Beulah (Peggy Clark) sport identical blue bonnets and dresses. The sisters appear on center stage and sing "All The Guys That Turn Me On Turn Me Down".

Ernest- Ernest is a brown bear who plays the fiddle while wearing a brown hat, a white collar and a red polka dot tie. Ernest was also voiced by Van Stoneman from October 1971 until July 1975 when Randy Sparks took over his vocals on “If You Can’t Bite Don’t Growl”.

Teddi Barra- Teddi knows how to make an entrance. She comes down from the ceiling on her pink rose-studded swing, fabulously decked out in a pink hat and long pink feather boa. She is voiced by Roni Stoneman and sings "Heart We Did All That We Could".

Big Al- Big Al is a big grey bear who wears a burgundy vest and hat and plays an out-of-tune guitar. He sings "Blood on the Saddle" and his insistence on interrupting Henry and Sammy with an unsolicited encore leads to the grand finale of the show. Big Al is voiced by Tex Ritter (father of comedy legend John Ritter) and is modeled after Imagineer Al Bertino.

And now for your viewing pleasure, here's a video of the original show I've shamelessly stolen from YouTube. Enjoy!