A Tale of Two Coasts

Having just returned from a glorious week on the West Coast, I wanted to take a quick minute to give you a look at Disneyland through the eyes of a Walt Disney World veteran. While many of the more obvious comparisons are well-documented (Disneyland has a better Pirates of the Caribbean, Walt Disney World has the superior Twilight Zone Tower of Terror), there were a lot of differences I noted that I haven't heard mentioned often, so I thought I'd highlight a few for you:

1. Better Tasting Water – Hey; I never said they were life-altering differences. That said, Disneyland has tolerable-tasting water, unlike the foul fishy fluid that comes from Florida taps. We actually filled our water bottles out of the sink in our villa at the Grand Californian and chilled them overnight for use the next day. You couldn't pay me to do that at Walt Disney World.

2. Better Healthy Food Options – At Walt Disney World, your choices generally seem to be between an apple, an orange, or an under ripe banana. At Disneyland the fresh fruit options are more varied, including my personal favorite: Mango with Lime and Chili Spices. Yum! 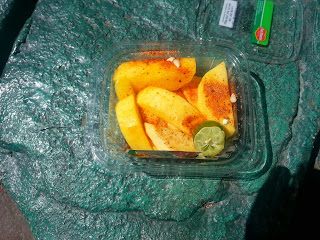 3. Convenience – Okay, this is a “depending on how you look at it” sort of thing. Flying to Los Angeles from Ohio? Not even remotely convenient; Florida definitely has the edge there for me, personally. But once you're on Disneyland property, life is awesome. Two words for you: No buses. You want to head to the Disneyland Hotel for dinner at Steakhouse 55 or a drink at Trader Sam's? No problem; it's just a pleasant stroll through Downtown Disney. You get off Pirates and want a real drink instead of a kiddie Mint Julep? Sure thing; let's just cross the Esplanade to Disney California Adventure. I can't overstate how awesome this was. Even navigating inside a particular park was easier due to the more compact size. And being that close to the parks can make for a nice view from your room. I'm telling you, I believe that had I shouted from my balcony, guests in the park could have heard me. (That surprises no one; I know.) 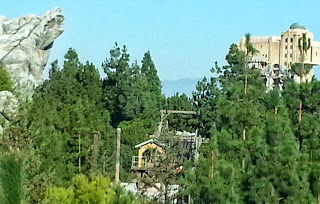 4. Speaking of Drinking – What can I say; I have my priorities. While I very much missed my annual tour of Epcot's Food and Wine Festival, between the Karl Strauss Red Trolley Ale and the fantastic wine samplings at the Mendocino Terrace, I was a happy girl. A very happy girl.

5. Navigation – Getting around was a lot easier, thanks to the general lack of Electric Conveyance Vehicles hogging the paths. I'm not criticizing anyone for using them. I'm just saying I saw far fewer of them in California.

6. Shopping – Walt Disney World definitely has the edge here. Maybe it was the lack of Epcot. Perhaps it was the smaller Downtown Disney. Heck, it could have even been due to the small number of resorts to tour, but any way you look at it, I felt a little short-changed in the shopping department... particularly when it came to jewelry.

7. Dining – In-park restaurants sometimes quit taking reservations an hour before the park closed! That would never fly at WDW, and was something of a disappointment. But that said, it was really nice not to be tied to a strict schedule of ADRs. And the food itself was great. Steakhouse 55 was our favorite restaurant of the trip – including the time we spent in Los Angeles and on the coast. Nothing else even came close.

Well, there you have it. This isn't a complete list of the differences between the two resorts – heck, it isn't a list of the major differences. These are just the ones that really stuck out in my mind as being noteworthy and not necessarily excessively documented. I hope this information helps you if you ever decide to head west!