Lou Mongello is a Genius

I know, I know; you knew that already.
But seriously, I was getting caught up on some relatively recent podcasts and listened to Lou Mongello’s News Chat for March 9, 2011. A bit of background: Lou is the author of the Walt Disney World Trivia Books (Volumes I and II), as well as the Audio Guides to Walt Disney World, and is the host and producer of WDW Radio, the award-winning online show about Walt Disney World.  In this particular episode, he discusses some possible uses for the old Virgin Megastore building at Downtown Disney. 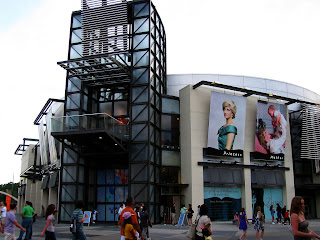 For those who may not be aware, The 49,000 square foot Virgin Megastore was located at Downtown Disney's West Side and was billed as “a state-of-the-art music, video, interactive media and book showplace featuring the hottest tunes, the best movies and more.” You were invited to “(t)ake a look at great flicks in one of the 20 video/laser preview stations. Groove to your favorite artists or discover new bands in a gallery of over 300 CD listening stations.”
However, on March 2, 2009 Virgin Megastore CEO Simon Wright announced that they would be closing all Virgin Megastores in the U.S., including the one at Downtown Disney West Side. The store was closed on May 12, 2009.
Since Virgin vacated the building, it has served as a temporary home for a couple of rather diverse tenants.  Off the top of my head, I can recall the Princess Diana Exhibit and Ridemakerz.
“Diana – The People’s Princess” found a home there from July 7, 2009 – November 30, 2009.  It showcased the life and story of Princess Diana, one of the most iconic and inspirational figures in recent history, including a sampling of the royal dresses Diana chose to auction for charity and hundreds of authentic artifacts relating to her life.
Ridemakerz is a supercharged interactive experience that lets kids of all ages dream up, build, and customize their very own radio controlled car or truck. It opened March 25, 2010 and seems quite popular, but is only slated to remain open at this location through April 30, 2011.
So for Disney speculators far and wide, this begs the question: What’s next for this super-sized structure?  The best suggestion I’ve heard by far was on Lou’s podcast.  I am so ashamed that I didn’t come up with it myself:
How about a Walt Disney World Museum?  For Disney geeks like me, this would be beyond fabulous.  And it would be so easy for Disney; they have all sorts of stuff in storage from old attractions.  They could have separate sections for proposed attractions and resorts that never saw daylight, extinct attractions, the history behind the purchase of the property and construction of each of the parks, and even a blue sky area to showcase upcoming enhancements to Walt Disney World. And I am absolutely salivating at the thought of purchasing merchandise tied to these concepts.
What do you think?  Would you take time out of your Walt Disney World vacation to visit a museum? Would you be willing to pay a separate entrance fee for this opportunity?  And would you be next to me in line at the check-out counter with armloads of vintage merchandise and a worn-out credit card?  Let me know over at http://www.facebook.com/disneygene!

As we plan for our upcoming Walt Disney World trip with some family members who are not WDW veterans, I’ve decided to start emailing occasional trip tips to them to help them prepare.  And since I’m in a sharing frame of mind, well, here you go!
It’s 6:45 A.M.  You are sound asleep in your Disney resort room until you are jerked awake by the sound of a phone.  You grope for it blindly and bring the receiver to your ear.  Before you can mutter a groggy “Hello?” the following blasts into your ear:
http://www.talkdisney.com/forums/attachments/disney-gadgets-gizmos/3296d1197598115-disney-resort-wake-up-phone-call-resort-wake-up-call.wav
Your first thought is probably one of the following:
A. “It should be illegal to be that cheerful this early.”
B. “Does this thing have a snooze button?”
Or
C. “I am going to kill Aunt Teri for making me get up at 6:45 on my vacation.”
Yes, it sucks to get up that early.  But trust me; the first several hours of each day are the most important of your Disney vacation. You are going to thank me when you get to walk right on Toy Story Midway Mania or Space Mountain when the schmucks who don’t roll into the parks until 11:00 are stuck in line for two hours for the same attractions.
Since you’ve bothered to haul your bottom out of bed that early, it’s important to make sure you don’t waste precious time dawdling.  I’m mean really, what sounds like more fun: getting yelled at by your mom to brush your teeth and comb your hair, or riding Expedition Everest?  Remember, you only have to get yourself ready in the morning.  Your mom is trying to get all of you organized and out the door, so help her out, okay?
Also, there are ways you can help speed up your Disney mornings before you even leave home.  How?  Pack smart.  If you put each day’s outfit (including underwear and socks) into separate Ziploc bags, you can just pull out a bag and have an entire outfit ready, instead of digging through your suitcase to find a pair of clean socks (and do you really want to risk grabbing a less than clean pair of underwear?).  This may sound like I’m going a little overboard in the organization department, but anything that gets you zipping down Splash Mountain sooner is worth the effort!
P.S. My thanks to www.talkdisney.com for posting the link for the Mickey wake-up call!